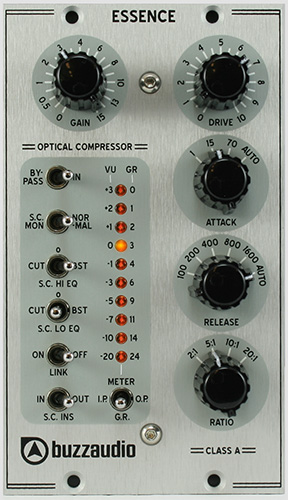 It is a really good comp, it definitely has a different vibe than the SOC-1.1. It reacts to the signal in the same way but is more colored tone wise, input and output transformers being the reason. More bass than the SOC also more punch in some ways, just a tad more aggressive in tone. S/C EQs and side chain input are also a good addition, really good meter as well! The SOC is more of a classic smoothing device whereas the Essence is a little more forward and snappier, on percussion elements especially. Works on everything, great for tracking bass and vox I found. Also good on drum groups, kick and snare, and for the bucks honestly you can't go wrong. Another 500 series winner!

Yeah, it's my goto box for bass now. If you push it, the transformers start to saturate and that can be really cool. I think I need a -6db line pad or something, though. The saturation only happens at really high levels (too hot for my Lynx Aurora A/D). I've got a Distressor, Summit Audio DCL-200 and Purple Audio Action, but the Essence is my fave for now. I'd love to try it on the 2-buss. We'll see if I can budget for another.
[2009]

These two [Elixir & Essence] are such a killer combination for my steelbody National that I had to get another set of them. I am only a musician, not a recording engineer, but I've been playing guitar for over 25 years and know what sounds good. These Buzz products are damn good. I am a fan!
[January 2007]

I have honestly tried to get the Essence to sound bad without success. Obviously, in only a few days I have not put it through all it's trials but it is exactly the 'tone-shaper' I hoped it would be and the build quality is first-class (I guess you know that!). The Essence is just fat and fabulous and along with the Elixir, this is definitely my new vocal/important track chain!
[January 2006]